La Clinica > About Us > Senior Leadership

La Clinica’s senior leadership provides administrative direction and support as the organization pursues its mission of providing quality, affordable care to all. Brenda leads La Clinica to provide primary medical, dental, and social services for underserved residents across 21 sites in Southern Oregon. She began her career with the organization in 2000 and prior to joining La Clinica’s staff, Brenda was a public health nurse with Jackson County Health and Human Services.

Brenda earned a master’s degree in business administration from Purdue University, a bachelor’s degree in nursing from Oregon Health Sciences University, and a bachelor’s degree in Spanish from Southern Oregon University. In 2016 she was appointed by the governor to the Oregon Health Policy Board, which sets the state’s health policy, and she is on the board of Jackson Care Connect, a coordinated care organization serving Jackson County. She also serves on the boards of CareOregon, Jefferson Regional Health Alliance, a regional collaboration dedicated to healthcare resources and health for Southern Oregonians, and ACCESS, Jackson County’s community action agency.

She has been recognized by Southern Oregon University as a Distinguished Alumni of the Year, named an outstanding regionalist by the Rogue Valley Council of Governments and cited for exemplary leadership by the Oregon Primary Care Association.

Brenda is a Portland, Oregon, native who has lived in Medford since 1985. In her leisure time she enjoys singing, reading, spending time with her husband, and playing with her children.

Her intention with La Clinica is clear.

“I have a deep appreciation and understanding of the importance of diversity and the honor of providing true support and service to others. La Clinica offers me the gift and opportunity to live those values every single day,” she says. 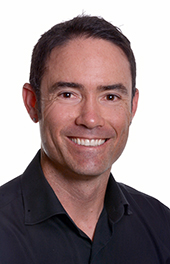 Dr. Adams holds a medical degree from Oregon Health & Science University in Portland, a master’s degree in ecology from the University of California at Davis, and a bachelor’s degree in biology from Lewis and Clark College in Portland. He served his residency at St. Mark’s Hospital in Salt Lake City, Utah. His professional interests include sports medicine and complementary medicine, and Dr. Adams favors a wellness approach to supporting the health and well-being of his patients.

Dr. Adams grew up in Ashland, where he now lives with his wife and two children. He is a mountain biker, runner, skier, and snowboarder, and enjoys competing in marathons and triathlons and “anything else that has me moving in the outdoors.” He also loves to travel.

“Having grown up in Southern Oregon, I have long been impressed with La Clinica as an organization and with the people who worked there,” he said. “From the time that I decided to go into medicine, it has always been in the back of my mind as a place that I would like to work.  I also speak Spanish and enjoy working with our Latino population.” She came to the organization in 2017 from Harry & David, where she served as vice president of finance and chief accounting officer and corporate controller.

She was employed by Harry & David between 2012 and 2017 and between 2001 and 2008, serving in accounting management and financial analysis positions. She was an auditor for Deloitte and a senior consultant for Arthur Andersen LLP, both financial services firms, in Portland, and was controller at PremierWest Bank in the Rogue Valley.

Jill is a certified public accountant and holds a master’s degree in business administration from Southern Oregon University. Dr. Fine moved to Medford from Portland. Her favorite pastimes include spending time with her two children. Community work and volunteering are integral to Dr. Fine’s life. She is an advocate for SMART (Start Making A Reader Today) and Friends of Trees, and she has been involved at the state level in improving access to health care. Before joining La Clinica, Traci was clinic manager and a case management nurse for the Community Health Center in Medford, and earlier she was part of the leadership team in the rehabilitation programs at Providence Medford Medical Center. She earned her associate degree in nursing from Weber State University in Ogden, Utah, and her bachelor’s in nursing from the University of Phoenix in Arizona.

Born into a military family in Maine, Traci moved a lot as a child but has called Oregon home for more than two decades. In her spare time, she enjoys golfing, reading, playing with her grandchildren, and spending time with her family. Tara Kirk, who started her career at La Clinica in 2002 as a medical records clerk, transitioned in early 2019 into the chief operations officer role.

Tara has a strong background in operations management and quality improvement, serving as a practice manager and performance excellence director before taking the top operations job.

She is a certified Lean Practitioner in healthcare quality and a certified practice coach for primary care innovation. In addition, she is a Baldrige examiner for Performance Excellence Northwest, an organization dedicated to business effectiveness. She is passionate about empowering teams and individuals, removing barriers, and inspiring innovation. Karen Sauer is a family physician at La Clinica Wellness Center and in her medical leadership role is responsible for recruitment and employment of La Clinica’s physicians, family nurse practitioners, and physician assistants.

She earned her medical degree from the University of Texas Health Science Center in San Antonio, where she was given the Dr. Alexander Major Memorial Award. She completed her residency at Natividad Medical Center in Salinas, California, where she was named chief resident her final year and received the Dr. Joseph R. Hannon Memorial Award. Dr. Sauer is certified by the American Board of Family Medicine.

Dr. Sauer first joined La Clinica in 1996 and returned to our staff in 2005 after a few years away. She is bilingual in English and Spanish, and has worked in migrant health and education since 1986. Jamie Osborn is a family physician at West Medford Health Center and holds a medical leadership role working with teams to plan and manage operations of all La Clinica medical centers to focus on how we can all be as healthy as possible together.

She earned her medical degree at Loma Linda University School of Medicine, in Loma Linda, California, and her bachelor’s degree in biology at Milligan College, in Elizabethtown, Tennessee. She is committed to transforming health care and being in partnership with and for those who struggle to obtain equitable access to health and wholeness. Maria Ramos Underwood guides La Clinica’s fundraising initiatives and helps community partners join in our work to improve the health and well-being of our community.

Previously Maria served as the organization’s deputy director and wellness and prevention coordinator. Before joining La Clinica, she was Hispanic outreach advocate for Dunn House, Jackson County’s domestic violence shelter. Maria graduated from Arizona State University with a bachelor’s degree in sociology. She is a member of the boards of the Health Care Coalition of Southern Oregon (HCCSO) and the Gray Family Foundation. She is a steering committee member of All in for Health Care, the team overseeing our regional community health improvement plan.

Maria, born in Mexico, was a child of seasonal farm workers and grew up using community-based health services similar to those provided by La Clinica. She relocated to Medford in 1997 from Tempe, Arizona, when her husband Verne was hired by Rogue Community College. The couple has two adult children. She is an avid reader and enjoys traveling, cooking, and watching movies with her family.

Julie Wurth oversees the organization’s communications with employees and the community.

She turned to La Clinica after a career in journalism, most recently for Medford’s Southern Oregon Media Group, where she was an editor and manager at the Mail Tribune for 18 years and a member of the newspaper’s editorial board for a dozen years. She earned a bachelor’s degree in communications from Washington State University in Pullman and has spent time in the community volunteering at schools to help students learn to read. She is a member of the Friends of the Multicultural Fair Planning Committee in Medford.

A Washington native, Julie moved to Southern Oregon in 1992 and lives in Medford with her husband and daughter. She enjoys the outdoors, books, family and friends, and periodic trips to the city.